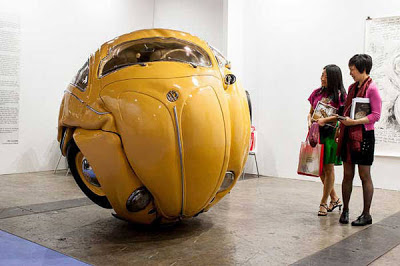 We know The VW Beetle has one of the most iconic shapes in the automotive world product by Volkswagen automaker German. First time its introduction in the late 1930s, distinct bulbous form has been both admired and mocked, but few would deny the massive success of the little car.

But in hand Ichwan Noor, Indonesian artist he make the beetle more perfect sphere. When you look at the morphed shape of the sculpture, it’s pretty hard to believe this was ever a road worthy car. The amount of metalwork is astounding, seeing the car’s features pushed and pulled to the extent that even small elements like the tail lights don’t protrude from the shape of the sphere.

This isn’t the only time Noor has re-imagined the shape of the Beetle. He also created the antithesis of the car’s shape in 2011 when he made one into a perfectly angular cube. It’s difficult to realize it’s a Beetle…

Volkswagen has begun to market the latest generation of VW Beetle Fender Edition in several countries in the world. But how fate for in Indonesia?

Volkswagen CEO Andrew Nasuri Indonesia said that the VW Beetle is still stalled by the quality of fuel oil (BBM) so it can not be marketed to consumers in Indonesia. 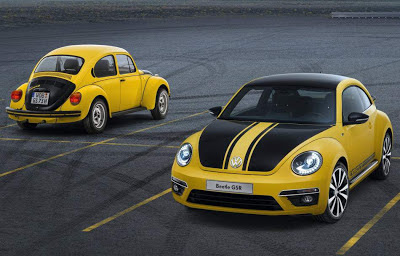 But who knows, he has a unique / ferocious version for the VW Beetle. This version name is VW Beetle GSR and limited produced.

First introduced the VW Beetle GSR model in 1973 and now 2013 Volkswagen want to reincarnation this model and the planing every 40 years, on 2053 later this model will be reborn again and of course for limited-edition. 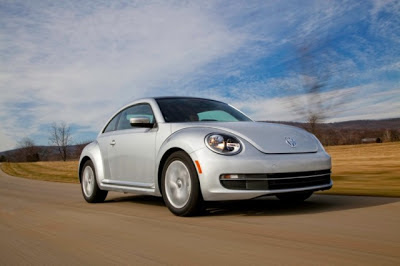 Volkswagen announced that a turbo diesel Beetle would be launched later this year. And while we've already driven the diesel powered Bug. But for design side 2013 Volkswagen Beetle more cute and bubbly shape. I thinks this very cool if with a lady driver ^_^..... Bodystyle Hatchbacks. Wait ... First you have to open the hood, looking inside, fairly muscle ...? yes very muscular.... Performance 0-60 mph on 8 second.

Short Story of the Beetle

THE HISTORY OF THE BEETLE, really goes back to pre 2nd world war, when Adolf Hitler had a vision of a mass produced vehicle that was affordable to the average German. Started in 1934 when in the Hall of Berlin Adolf Hitler announced that the car had not to be an exclusive privilege of the rich. To Ferdinand Porsche, defined by him as "the most famous designer of all time", he entrusted the assignment to construct the Volkswagen (the people's car). Hitler was apparently influenced by the achievements of Henry Ford and his production lines - reading Ford's biography while in prison during 1923.

On January 17, 1934, the German Reich government received a design proposal for a people’s car, a “Volkswagen” (German for ‘workers wagon’), from Ferdinand Porsche. It appeared feasible and shortly thereafter, Ferdinand Porsche received a contract from the German motor industry association (RDA) to deliver a prototype within 10 months.


By October 1935 the first prototypes was completed but remained a secret, were on the autobahns, the V1 saloon and a convertible V2, these cars had aluminium bodies mounted over traditional wooden frameworks. In 1936 steel bodies mounted over all-steel floorpans were used, powered by a 984cc, 22bhp engine that could reach a top speed of around 65 mph.

The design would one day become one of the best-known symbols of German manufacturing quality but it was not apparent then. The car looked quite unusual, and very different from its final design. The distinctive split rear window (referred to as a “pretzel window”) and the running boards and bumpers were not as yet part of the design. The headlights were still separate units perched on the lid of the front luggage compartment. The doors were hinged at the rear and were only changed in the final prototype series in 1938 under American influence. 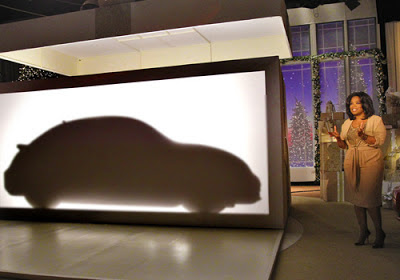 OPRAH gives away new VW Beetle to her entire audience, all 275 of them: “The Beetles are coming”
This crazy so cool... Oprah’s Ultimate Favorite Thinks.

Unfortunately, her audience members can’t get their cars yet because Winfrey gave them 2012 New Beetles. That new version of the iconic curvy little car has yet to be revealed to the public.